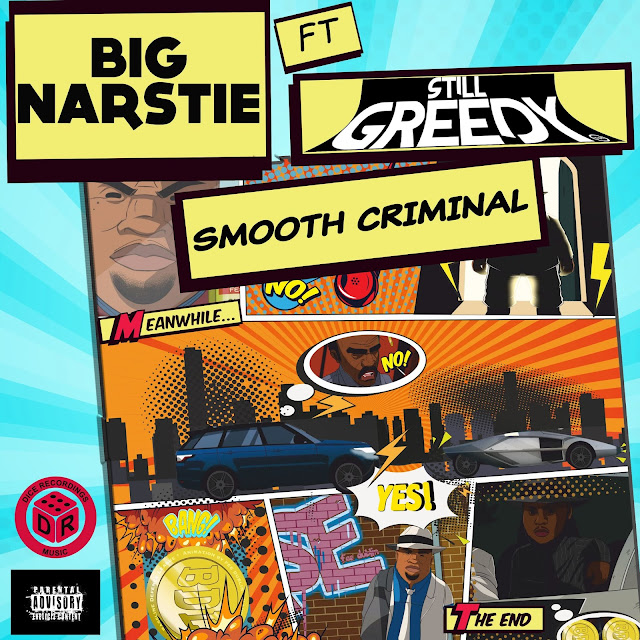 Undoubtedly one of the biggest stars to come out of the Grime scene, Big Narstie has become a much-loved British icon. From his early days coming up in the raw and ready UK Grime and Hip Hop scene as a teenager from Brixton, to more recently landing his own award winning Channel 4 TV show with Mo The Comedian ‘The Big Narstie Show’, he’s also been a hit with the nation on Big Fat Quiz, Celebrity Coach Trip, Celebrity Bake Off and plenty more. Yet despite his celebrity status, the music lays at his heart and for his latest release, he teams up with Dice Recordings label mate, Still greedy to drop the MJ inspired ‘Smooth Criminal’.

Kicking off with a haunting, key led instrumental and the impressive, soulful, choristerlike intro from Still Greedy, the vocals transform into his slick flow, followed by Narstie’s signature flow, raw raps and witty lyricism. The track sees Big Narstie back to his original street style, which led to his original rise to fame, and breaks from his party hits.

Make no mistake of it, out of the TV limelight Big Narstie is a major UK music act who has built a musical profile of 60 million+ streams. His latest album BDL BiPolar featured Ed Sheeran, Raleigh Ritchie and Craig David, where he scored a top 10 single with When The Baseline Drops and his brand has even diversified to endorsements with the likes of Zopa, 888Sport, McDonalds and Carphone Warehouse leading the way as a brilliant example of a modern day success story.

Having been named Best Grime Act at the Urban Music Awards five times and been heralded as Noisey’s Man Of The Year and Personality of The Year at GRM Daily’s Rated Awards, Big Narstie has also wowed audiences at the likes of Lovebox and Glastonbury. Now stepping into the shoes of another icon to deliver his very own ‘Smooth Criminal’, Big Narstie keeps it 100 on his new release.

Check out SMOOTH CRIMINAL out now across all DSP’s.