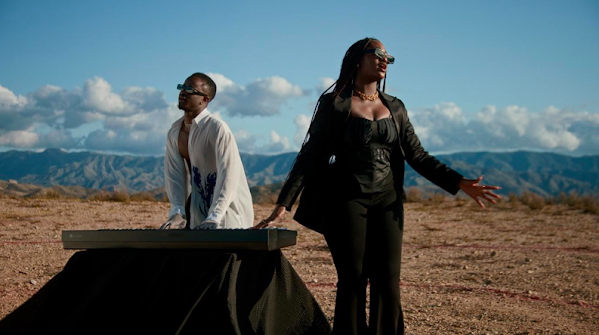 “’No More’ … a beautiful song.” – THE FADER
“The future of R&B.” – JOE BUDDEN / THE JOE BUDDEN PODCAST
Following last year’s release of his mesmeric, self-produced 7-track EP ‘Mirage’ (released via Platoon), Mannywellz - the Maryland, USA based Nigerian-born Afro Soul music artist - today drops the breath-taking visual for ‘Peace’, his spellbinding collaboration with the rising Nigerian singer Tems (known for singles such as ‘Try Me’, ‘Damages’ and her collaboration with Afrobeats star Wizkid on the hit single ‘Essence’).
Directed by Quinci Bryant and Sarah Lorentzen and shot in Los Angeles, the cinematic clip subtly uses symbols and movement to depict the things that might cause us to spiral or get stuck in certain cycles in our lives. Whilst the song can be viewed to narrate a romantic relationship, Mannywellz wrote the song to also personify our addiction to social media. Viewers and listeners alike are encouraged to give the ‘peace sign’ to whatever their attachments are.
Showcasing African fashion brands Daily Paper and Gëto, the visual also features a captivating, alternative ending to the song.
Speaking on the ‘Peace’ visual, Mannywellz said:
“Peace is really special to me because it came from a vulnerable place, We all have one or multiple things that we want to get rid of.”
Emerging nearly three years after his debut project, Soulfro, ‘Mirage’ sees Mannywellz dive further into the realms of Afro Soul and R&B. His powerful harmonies, playful cadences, and unique instrumentation give a subtle nod to his Nigerian roots and features mesmerizing vocals from an array of heavy-hitting featured artists. Additional collaborations include R&B sister duo VanJess on ‘Floating’ and the Grammy nominated Hip-Hop star Wale on ‘A Million’. Mannywellz recently released an incredible live performance of the ‘Mirage’ EP (watch the performance here).
Using his own personal experiences to inform his storytelling, he has his eyes set on purpose that is bigger than music – to impact lives. He collaborated on the Grammy Award winning project ‘American Dreamers: Voices of Hope, Music of Freedom’ in the Jazz category with fellow DACA artists. With a culmination of his dynamic live performances seen at his sold-out ‘META’ tour last year, song-writing and production and accolades from outlets such as The FADER, OkayPlayer and Complex and with more new music and exciting collaborations on the way, Mannywellz has firmly positioned himself as one of the most promising ascending stars around.
STREAM THE ‘MIRAGE’ EP HERE
at August 19, 2021