EVENT: @THEENDSFESTIVAL OVER 30,000 PEOPLE HEADED TO LLOYD PARK IN CROYDON THIS WEEKEND FOR THE INAUGURAL EVENT 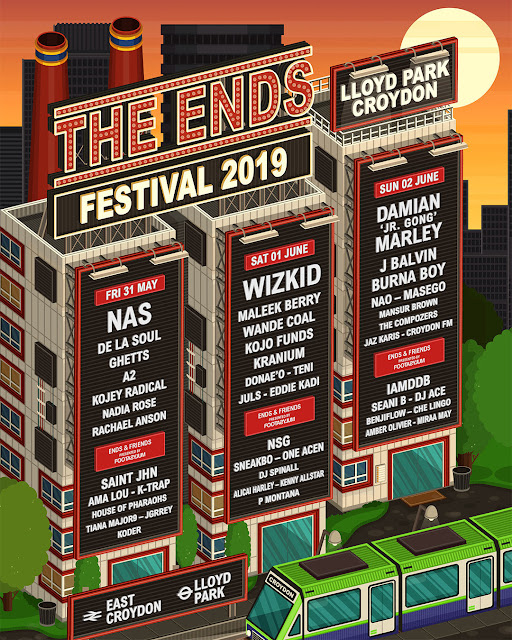 Over 30,000 music lovers packed out Croydon’s Lloyd Park this weekend for an incredible three days of live music for the inaugural The Ends Festival. Headliners Nas, Wizkid and Damian Marley brought the house down with electrifying performances, while J Balvin, De La Soul, Nao, IAMDDB, Mirra May, Masego and many more turned the heat up across the three-day event that is confirmed to return in 2020.

The first ever Ends Festival was a weekend that brought together legendary greats across the worlds of hip-hop, grime, soul and Afrobeat, as well of some of the hottest new artists and upcoming talent. It was a family affair in London’s Croydon, with Nadia Rose opening the main stage on Fri 31 May watched by cousin Stormzy in the audience. Rachel Anson, Stormzy’s sister, led a moving tribute to the late Nipsey Hussle with a DJ set during his scheduled slot, and blue balloons were released in his honour while the sun set over Lloyd Park. Kojey Radical, A2, Ghetts, Saint Jhn, K-Trap and De La Soul gave their first UK festival appearances of the summer, while Nasbrought the day to a close with an all energy, high-octane performance.

Saturday’s line-up saw Maleek Berry, Sneakbo, Wande Cole, Kojo Funds and Kranium take to the stage, adding fuel to an already flaming hot line-up. NSG left the fans with no “Options,” ensuing a packed out sea of trap-mashers dancing the day into night. The crowds went wild in the beating sun as Wizkid rocked the stage, uniting a hectic Lloyd Park with a live set of Afrobeat tunes and dancehall anthems.

The sun continued to shine into Sunday as J Balvin took to the main stage with the craziest set of the weekend. The Columbian superstar brought some Latina beats to proceedings, complete with inflatables and giant bobbleheads of Cardi B and himself. Burna Boy, Nao, Masego, IAMDDB, The Compozers and Mansur Brown all gave the crowds what they wanted with loud, all-out performances. Damien Marley brought the weekend to a close. The youngest son of Bob Marley continues to tread his own righteous path with his distinct style of roots reggae.

The Ends Festival took place from Fri 31 May – Sun 2 June in Lloyd Park, Croydon. For more information and to keep up to date on the 2020 announcement visit theendsfestival.co.uk.
at June 04, 2019