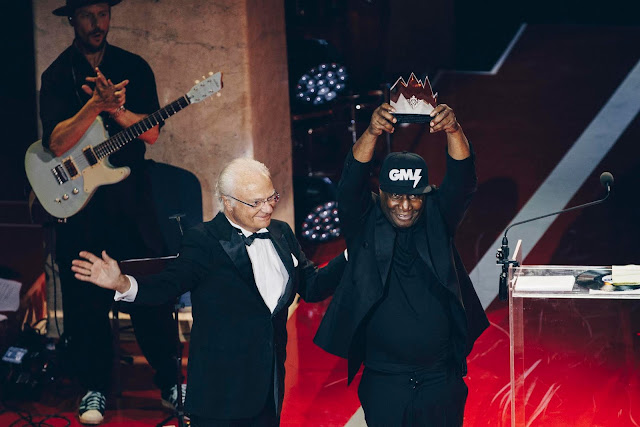 Stockholm, 11 June 2019: This evening, hip-hop pioneer, Joseph Saddler, known as Grandmaster Flash, world-renowned violinist Anne-Sophie Mutter and music charity, The Playing For Change Foundation, have been presented with the Polar Music Prize, the world’s most prestigious award for music. King Carl XVI Gustaf presented the Awards and the citations were read by: DJ Maseo, for Grandmaster Flash, Frank Briegmann for Anne-Sophie Mutter, and Dr Ahmad Sarmast from ANIM, the 2018 Polar Music Prize Laureate, for Playing For Change. The Gala Prize Ceremony and banquet was held at The Grand Hotel Stockholm.

“I want to say thank you for inviting our culture to this wonderful gathering. I come from a very small place called The Bronx…this thing that I did had not existed before and I am one of many where I come from. It ended up being called hip-hop, taking the drum break from pop, rock, jazz, blues, funk, disco, R+B, and using duplicate copies of records…I would take one section and repeat it over and over again. This self made music bed served for the breakdancers, and later, for the MC’s…I accept this award in honor of every DJ, every rapper, every graffiti artist, every breakdancer.

“I must say I’ve received many awards in my lifetime, but this one here is the most special because you guys took time to take me apart. To find out how I was thinking. So I say to the Polar Prize, thank you so much.”

“I am simply overwhelmed by the honour and acknowledgment which you, who are responsible for the Polar Music Prize, are bestowing upon me. This distinction fills me with pride and joy, as you are permitting me to join the ranks of the wonderful musicians who have previously received the prize. I admire many of them profoundly, for example Witold Lutosławski, Sofia Gubaidulina, Ennio Morricone, Dizzy Gillespie and Mstislav Rostropovich, to name just a few.

“My special thanks on this day, however, are due to the incomparable Astrid Lindgren. Her Pippi Longstocking has been a role model for me since my childhood. Like no other literary figure, this red-haired girl showed me that females can be active and self-determined, finding their own path with creativity and wit. Living her own dreams, and daring to be different: at the time when I first read the Pippi Longstocking stories, that was not taken for granted when it came to girls and women. And, from a global perspective, it is still not to be taken for granted.”

Mark Johnson and Whitney Kroenke, co-founders of The Playing for Change Foundation, were both in attendance to accept the foundation’s award. Whitney Kroenke said: “We are so humbled to accept this award in the company of so many artists and heroes of ours, each that have inspired us and the work we do at Playing For Change.”

Mark Johnson added: “We stand here today representing our shared dream…Thanks to all of you and to the Polar Prize for sharing this same dream and for honoring us with this amazing award. We dedicate it to the human race. The one group we are all a part of.”

The event is broadcast live on Swedish national television (TV4) at 8pm CET and can be viewed throughout Europe via TV4 Play. Each Laureate receives prize money of one million Swedish Kronor. (approx. GB £90,000 / US $130,000).

Videos, publicity shots and biographies are available on the website www.polarmusicprize.org.

Grandmaster Flash:
The Polar Music Prize 2019 is awarded to the DJ and musician Joseph Saddler, known as Grandmaster Flash. Born in Barbados and raised in the South Bronx, New York, Grandmaster Flash created a whole new way of making music. Grandmaster Flash is a scientist and a virtuoso who has demonstrated that turntables and mixing consoles can be musical instruments. His adventures at the turntables – “the Adventures of the Wheels of Steel” – changed the course of popular music. Some 40 years later, the musical form and the hip hop culture that Grandmaster Flash helped to create, in the ruins of the South Bronx in the mid-1970s, has grown into the largest music genre, hip hop, in the United States and the world.

Anne-Sophie Mutter:
The Polar Music Prize 2019 is awarded to the German violinist Anne-Sophie Mutter, known as ’the Queen of the Violin’. She grew up in a small village in the Black Forest. By the age of five, it was obvious that the football-playing girl had an exceptional musical talent. At the age of 13, she auditioned for Herbert von Karajan. The following year, she started playing with Karajan and the Berlin Philharmonic Orchestra. Over the years, several of the world's foremost modern composers have written music specially for her. With her Stradivarius under her chin, Anne-Sophie Mutter is not just one passionate and risk-taking musician – she is also a storyteller. As she herself said, “Music is only touching when it tells a story.” With her passionate commitment to justice, Mutter demonstrates the power and key role of music in the world

The Playing for Change Foundation:
The Polar Music Prize 2019 is awarded to The Playing For Change Foundation dedicated to providing music and arts education to underprivileged children around the world. In 2002, co-founders Mark Johnson and Whitney Kroenke created the Playing For Change movement from the shared belief that music has the power to break down boundaries and overcome distances between people. The organization established the foundation in 2007 as a way to give back to the communities of the musicians they met along their journey. Since then, it has grown into a global project with 15 music schools and programs around the world that have impacted the lives of over 15,000 children and their surrounding communities. The Playing For Change Foundation shows how music can be used to inspire, build bridges between people, create positive change, and conditions for peace.

ABOUT - THE POLAR MUSIC PRIZE:
The Polar Music Prize was founded in 1989 by the late Stig ”Stikkan” Anderson, a true legend in the history of Swedish popular music. Stig Anderson was the publisher, lyricist and manager of ABBA, and he played a key role in their enormous success. The name of the prize stems from Anderson’s legendary record label, Polar Music.

The Polar Music Prize celebrates the power and importance of music and is awarded to individuals, groups or institutions for international recognition of excellence in the world of music. The roll call of former Laureates reads like a who’s who of music: Paul McCartney, Dizzy Gillespie, Patti Smith, Bob Dylan, Ravi Shankar, Renee Fleming, Ray Charles, Youssou N’dour, Mstislav Rostropovich and Kronos Quartet, to name but a few.

In 2019, the Polar Music Prize awards three Laureates in order to celebrate music in all its various forms and to emphasize the original intention of the Polar Music Prize: To break down musical boundaries by bringing together people from all the different worlds of music.
at June 12, 2019