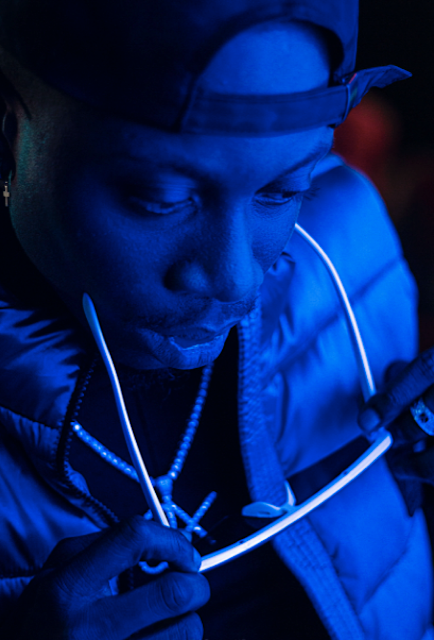 Already causing serious waves across not only the Nigerian and African music scenes but the international music industry at large, with his infectious, signature Afro-fusion sound, Nigerian music act Oxlade has dropped the visual for his track ‘Away’, the lead single from his dazzling debut EP ‘Oxygene’.

Directed by the celebrated Nigerian cinematographer and director TG Omori aka Boy Director (Tekno, Zlatan, Naira Marley, Wizkid) and shot out in Cape Coast, Ghana, the vibrant and colourful, must-see visual breathes new life into the melodic Spax-produced track - which received a play on Ebro Darden’s Beats 1 show last week and was described by Pitchfork as ‘catchy, dancey and optimistic’.

Speaking on the visual, Oxlade said:

“The scene in the video around the lyrics ‘baby come rest pon me shoulder’ is very significant as actually behind every legend there is a queen. It’s me interpreting the significance of women in our society. Without them we can barely function!.”

“This was my first time working with Boy Director. He’s one of the hardest in the game right now. He’s young and doing it right. He’s abstract and I am too, so it was like a like-minds type of situation. He’d been showing me love and support already so it wasn’t hard to decide we should use him on this one.”

Released last month, amassing 3 million streams across platforms in its first week of release and currently on over 5 million streams, ‘Oxygene’ sees summer arriving early with a selection of six vibrant tracks which offer a formal introduction to the talents of the exciting Lagos-based musician Oxlade, ahead of his inevitable and imminent ascension to stratospheric heights.

Backed-up with production from top class Nigerian producers including Spax, Dera, Lussh, Echo and London-based Nosa Apollo and featuring a must-hear collaboration with the British-Nigerian singer Moelogo on ‘Tables Turn’, the EP combines Afrobeat, Hip-Hop, R&B and Country influences with Oxlade’s distinctive, soulful vocals and mesmerising songwriting and storytelling to create a project that is undeniably a modern classic in the making.

Born and raised in the well-known Mushin area of Lagos and later going on to study History & International Relations at Lagos State University, Oxlade started his musical journey in the choir. He started to put out music on Soundcloud in 2017 and the following year released his first official single ‘Shugar’ which instantly caught the attention of hordes of music fans. Also known for the hit song ‘Sing’ with Fireboy DML and collaborations with acts such as Reekado Banks and DJ Tunez, another breakthrough moment for Oxlade was his feature on the Blaqbonez track ‘Mamiwota’ last year. Also in 2019, Oxlade featured alongside Sneakbo on Skengdo’s UK underground track ‘Brixton Boy’ and he performed to a 20,000-strong audience at the world famous O2 Arena in London at Wizkid’s Starboy Fest.

On a mission to become one of the biggest music exports from Nigeria and the continent, with the release of his new EP ‘Oxygene’, currently being Apple Music Africa’s ‘Artist of the Month’ and with more new music, visuals and explosive live performances on the horizon, it looks like Oxlade is well on his way to reaching all of his goals!

“It’s catchy, dancy and optimistic: this shine has expanded his reach from Nigeria to the UK, and it would be no surprise if it soon found him fans in the States.” - PITCHFORK

“An introduction to the eclectic sounds of the Lagos-based artist, who made noise last year with a string of memorable collaborations.” - OKAY AFRICA