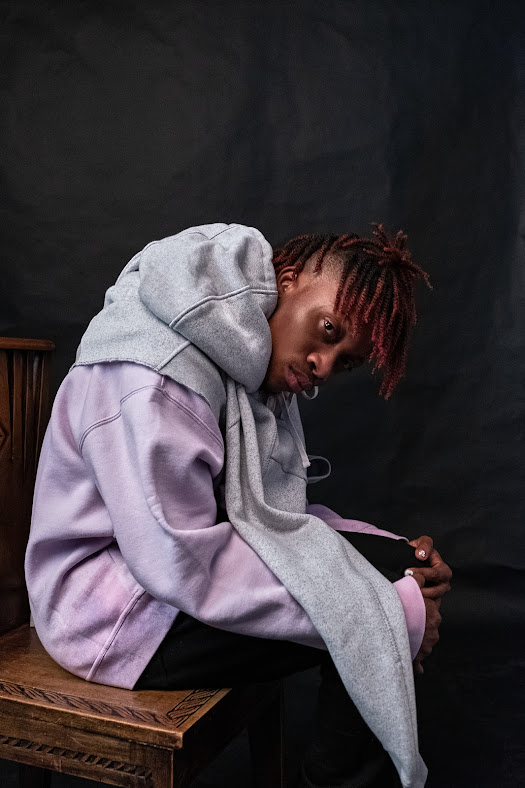 STREAM ‘OXYGENE’ HERE
STREAM ‘DKT (DIS KIND TING)’ HERE
Causing serious waves across the international music scene throughout 2020, with the release of his dazzling debut EP ‘Oxygene’ and its addictive lead single ‘Away’ – which had already been tipped for big things by outlets such as Pitchfork and Complex and gained fans in the likes of Naomi Campbell, Saweetie, Quavo and Drake, who recently posted the track to his 72 million Instagram followers – featuring his infectious, signature Afro-fusion sound, Nigerian music act Oxlade ends an already spectacular year with ‘Away’ being named as one of Rolling Stone’s ’50 Biggest Songs of 2020’ and a ‘Next Rated’ nomination at Nigeria’s prestigious Headies Awards.
Released in the spring and launched with the melodic, Spax-produced ‘Away’ - which received numerous plays on Ebro Darden’s Beats 1 show - Oxygene’ saw summer arriving early with a selection of six vibrant tracks which offered a formal introduction to the talents of the exciting Lagos-based musician Oxlade, ahead of his inevitable and imminent ascension to stratospheric heights.
Backed-up with production from top class Nigerian producers including Spax, Dera, Lussh, Echo and London-based Nosa Apollo and featuring a must-hear collaboration with the British-Nigerian singer Moelogo on ‘Tables Turn’, the EP combines Afrobeat, Hip-Hop, R&B and Country influences with Oxlade’s distinctive, soulful vocals and mesmerising songwriting and storytelling to create a project that is undeniably a modern classic in the making. The EP has received 60 million streams, with Away’ alone amassing 25 million streams.
Since then, Oxlade has gone on to feature on the P2J remix to the Skip Marley and H.E.R track ‘Slow Down’ alongside Davido, recently released his latest single ‘DKT (Dis Kind Thing)’ and collaborated with Nigerian producer Ojahbee on the track ‘Dutty Love’. Outside of music, Oxlade has been adamant about using his voice and platform to raise awareness around real issues affecting Nigerians, including the recent #EndSARS movement which he played an integral part in.
Born and raised in the well-known Mushin area of Lagos and later going on to study History & International Relations at Lagos State University, Oxlade started his musical journey in the choir. He started to put out music on Soundcloud in 2017 and the following year released his first official single ‘Shugar’ which instantly caught the attention of hordes of music fans. Also known for the hit song ‘Sing’with Fireboy DML and collaborations with acts such as Reekado Banks and DJ Tunez, another breakthrough moment for Oxlade was his feature on the Blaqbonez track ‘Mamiwota’ last year. Also in 2019, Oxlade featured alongside Sneakbo on Skengdo’s UK underground track ‘Brixton Boy’ and he performed to a 20,000-strong audience at the world famous O2 Arena in London at Wizkid’s Starboy Fest.
On a mission to become one of the biggest music exports from Nigeria and the continent, with the release of his debut EP ‘Oxygene’, world-class collaborations and with more new music, visuals and explosive live performances on the horizon, it looks like Oxlade is well on his way to reaching all of his goals!
at December 10, 2020