MUSIC: FEMI AND MADE KUTI’S ALBUM ‘LEGACY +' IS HERE! 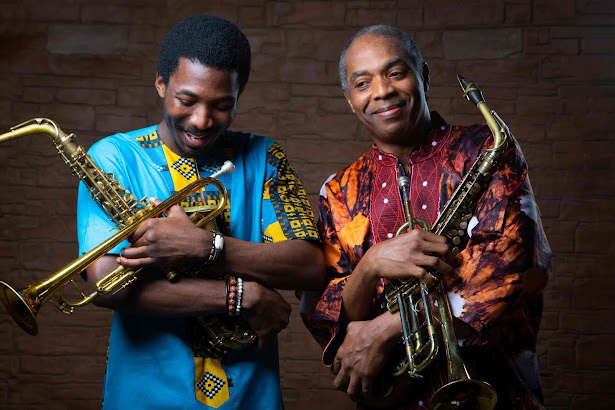 STREAM “LEGACY +”:
https://nglegacyplus.lnk.to/Kuti
Today, Femi Kuti and his son Made Kuti release ‘Legacy +,’ a special two-album package that includes solo albums from each artist – Femi’s ‘Stop The Hate’ and Made’s ‘For(e)ward’. The project has earned critical acclaim while Femi and Made proudly carry on Fela Kuti’s legacy as torchbearers for change. To celebrate the release, Femi has shared a music video for ‘Stop The Hate’ highlight “As We Struggle Everyday” (filmed by Optimus Dammy, edited by Audrey Hurtis, with illustrations by Kiki Picasso). Watch below:
Femi Kuti - “As We Struggle Everyday”
Both albums that make up ‘Legacy +’ are steeped in the tradition of Afrobeat invented by Fela Kuti (Femi’s father, and Made’s grandfather), but each also brings their own unique vision and sound. 'Stop The Hate' honoUrs Fela in a traditionally fun, sharply political, and affirming way. Meanwhile ‘For(e)ward’ is a modern and progressive freedom manifesto, pushing boundaries of the subgenre even further. Made also performs every instrument on his album!
Praise for ‘Legacy +’:
“Made Kuti is a one-man studio band...[he] merges the slow-simmering rhythm and implacable horn riffs of vintage Afrobeat with a looping, prismatic, multilayered production, doubling back toward psychedelia.” – New York Times
“Giddy and transcendent” – Paste
“With one listen through ‘Legacy +,’ it’s clear that the late Fela Kuti’s musical family tree remains both strong and fruitful.” – American Songwriter
“A fresh take on the Afrobeat sound that Fela pioneered in the 1970s and ’80s. Made carries the torch for his family’s Black consciousness and activist politics.” – SPIN
“A remarkable collection” - Loud & Quiet (9/10)
“Throws Afrobeat to the future” - The Observer
“The dynasty continues” - Uncut (8/10)