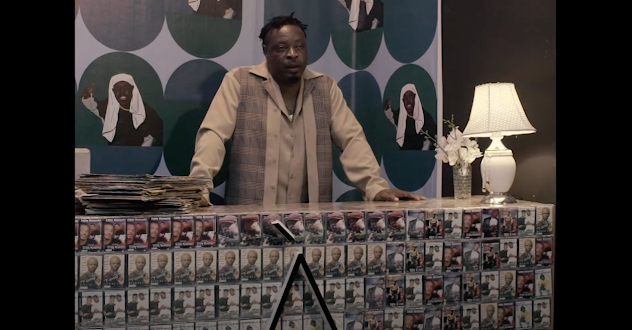 ÀWA STUDIO PRESENTS: A series of live concerts and performances - A celebration of respected talent and icons in the world of Nigerian music Lagos, Nigeria, March 12, 2021 - Kan Àwa in Yoruba translates to “Include Us”. This is the central idea that informs the experience of consumers who choose to engage with Kan Àwa.
Founded by Yvette Ogungbe and Olayinka Owoseni, Kan Àwa is an Experimental Marketing and Consulting agency located in Lagos, Nigeria. At the forefront of the founders’ beliefs is the primary need for consumers to be immersed in projects creatively irrespective of the brand. This belief extends to the Content Creation Division called ÀWA Studio, where imagination meets reality. In line with this vision, “Àwa Studio Presents:” was born.
“ÀWA Studio Presents:'' is set to celebrate key icons in the Nigerian music who set the industry on the course for global recognition. This will be done via a series of live shows followed by an exclusive interview segment titled “Untold Stories'' by ÀWA Studio. The primary goal of these segments is to not only celebrate these iconic names but to also educate the world about the journey of the industry from how it began, to how structures we know today were put in place. Ultimately, Àwa Studio is on a mission to take control of the narratives surrounding the Nigerian music industry by accurately documenting it before it is done by external sources.
The first episode, ÀWA Studio Presents: “Eedris Abdulkareem” aired on the 12th of March 2021 exclusively on the Kan Àwa website & was followed by the interview. The interview with Eedris was officially released on Youtube, Sunday 14th of March 2021. During the interview we unpack unseen aspects of Eedris Abdulkareem, where he takes us on the journey of his career, being blacklisted but setting the standard for how African Artists should be treated equally as Western Artists and also how he was 1 out of 5 Africans to carry the Olympic Torch around Africa for the first time after a 100 years in Egypt.
With an incredibly packed schedule, ÀWA studios have prepared a captivating directory of musical talents such as 2BABA whose single African Queen released in 2004 is still one of the most iconic love songs recognized internationally and in Africa, 9ice whose unique delivery of proverbial Yoruba songs changed the game and earned him a MOBO award in 2008 for the Best African Act, Daddy Showkey who invented the ghetto dance GALALA which is still being infused in modern-day Afrobeats dance, Sound Sultan who made artists realise that their sound is not limited to one genre by making music of different genres such as Hip-Hop, RnB as well as Afropop and much more talents.
This is coupled with culturally relevant discussions from the talents themselves in an additional feature titled Untold Stories by ÀWA Studios Each visual release will allow fans and supporters a chance into the minds of these icons after several decades of curiosity and lack of relevant documentation. To watch the trailers as well as past work.
Follow us on Instagram @kan.awa_ & @awa.stxdio and you can also Contact Us via email at kanawa.agency@gmail.com.
at March 15, 2021