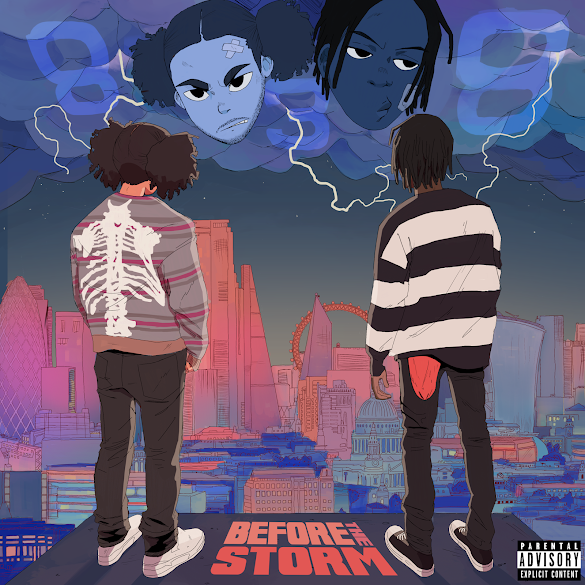 “838 make music for the people…A bold, uncompromising voice, 838 have lit up social media with a string of viral cuts, and now they're back.” - CLASH
Upcoming London duo 838 recently made their mark on the UK Rap scene with the release of ‘Lose My Mind’, the first single from their debut EP ‘Before The Storm’ on the run up to its release. Championed by Apple Music’s DJ Charlie Sloth as his ‘Hood Heat’ record of the week and selected by BBC Introducing London, 838 also found tastemakers including CLASH rallying to support them as they stepped into the realm of ‘crossover’ that so many artists aspire to.
Placed centrally to the U.K. Hip Hop scene, Kay and Astro aka 838, have previously dropped a number of well received singles and videos that have paved the way for their debut project. With the release of ‘Before The Storm’, (an apt titling message for their promising future), comes 5 tracks of raw, versatile and fresh energy that they have identified as their niche. Unapologetically themselves, they confidently weave melodic, skippy flows around their relatable, playful and eloquent lyricism as they dive across varying instrumental styles. Housing a soulful edge to their work, they differ from many young rap stars, in that they’re unafraid to touch their own emotions and lay their souls bare. They offer the energy and excitement of their youth teamed with musical awareness that has class and maturity. It’s a solid combination that brings depth and dimension to their music, as seen with the single ‘Games’ that accompanies the release.
STREAM/DOWNLOAD: 838 – BEFORE THE STORM
“This track is an emotional one” 838 explain, “it expresses your thoughts and emotions when dealing with a partner who may not be treating you how you deserve to be treated and questions if this whole relationship is even worth the time it consumes!”. Poetic as it is real, ‘Games’ is one of the EP highlights that has a mid-tempo flow and instrumentation that features tinkling keys and stripped back elements that spotlight the smooth transitions between Kay and Astro as they pass back and forth over the track. The connection between the two is the magic of 838 and what stands them apart. Whatever instrumental they jump on, you can be sure to have addictive flows and a flurry of ad-libs that are genuine and passionate. In an 838 record, it’s the emotion and depth from their lyricism and delivery that shines as their sound.
Forging a friendship at school, Kay and Astro have unshakable loyalty to each other. Starting their journey as basketball players, their high-school adventures soon uncovered their love for music. Whilst Kay had an eclectic musical diet of 80s & 90s rap, hip hop, grime, ragga, dancehall, reggae, soca, rock and heavy metal, Astro’s preferences sat in rap and 90’s hip-hop, teamed with an early taste for RnB, Afrobeat and Fuji which grew with time. These influences flow through the heart of their music and in each other’s company, they have the confidence to explore sounds, feelings and emotions that have been so central to their sound and philosophy, something which can be felt and heard across the new EP.
Welcoming you on their latest adventure, ‘Before The Storm’ marks an introduction into the world of 838 and if it’s anything like they expect it to be, then “It’s gonna be phenomenal.”
Stay up to date with 838 by following their socials for news about upcoming releases & more.
INSTAGRAM / SPOTIFY / YOUTUBE /
at June 26, 2021