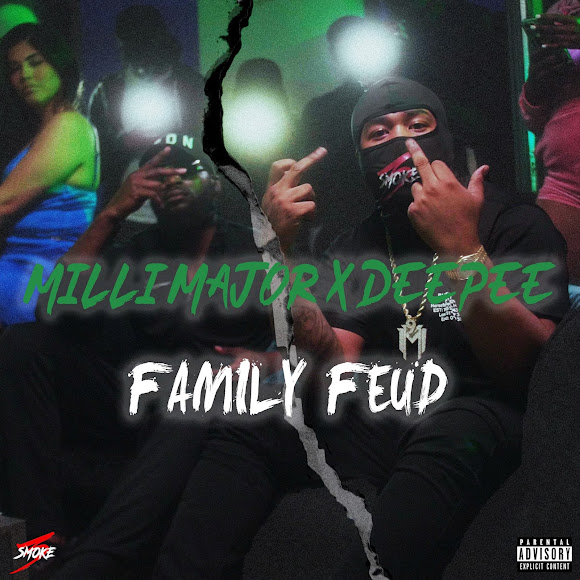 The art of street rap is not only based on the ability to tell stories of raw experiences and life on the frontline, but one of its key components in becoming such a prolific genre, is that those that do it well, are able to deliver it in such a way that you are carried along with the vibe and you get lost in the music, no matter who is listening.
STREAM/DOWNLOAD: MILLI MAJOR FT DEEPEE – FAMILY FEUD
One of the UK’s hardest street rappers, Milli Major teams up with Smoke Boy Deepee for a second time. The first track that saw the pair team up for was the huge single ‘Madness’ and now they return for new drop ‘Family Feud’. Going back-to-back, the rappers spit their signature gritty and straight-talking lyricism with energetic flair that captures their experience of inner-city street life. Milli Major explains: “Family Feud was created from a place, and at a time, when a lot of in things were happening in-camp both in terms of music and on in the streets. While street life isn’t necessarily relatable to everyone, Family Feuds are, and myself and Deepee both delivered that concept to create a vibe and make it sound wavey and enjoyable at the same time as hitting home. You can vibes to this one so much that you forget what the depth of the content is and just enjoy the music.”
MUSIC VIDEO: MILLI MAJOR FT DEEPEE – FAMILY FEUD
A gamechanger of street rap, Milli Major is an architect within the scene. Having an unshakable hands-on approach to his music for over a decade, the DIY king quickly taught himself to film, edit and direct his own visuals to sit alongside his music, and his self-taught skills evolved last year in to the release of his debut, critically acclaimed short film, ‘Major Paper’. Making his writing/directing debut, Milli Major also called upon his fellow 3Smoke comrades Paper Pabs and Bossman Birdie alongside scene stars Tion Wayne, Nines and Lippy Lickshot for the films soundtrack and scenes.
“Rising from the ashes of Bloodline (the successor to Meridian Crew), Milli Major, Bossman Birdieand Paper Pabs joined forces as 3Smoke and dropped their first single, “Side Of The Step” (as premiered via Complex), earlier this year. The trio are unstoppable with their musical output throughout 2021 so far, seeing numerous collaborations and individual releases spinning out of the camp regularly. With Milli Major stepping out with ‘Family Feud’, we eagerly anticipate the next 3 Smoke strike to follow.
Stay up to date with MILLI MAJOR by following them on socials for news about upcoming releases & more.
3SMOKE: INSTAGRAM / 3SMOKE
MILLI MAJOR: INSTAGRAM / TWITTER
at June 26, 2021