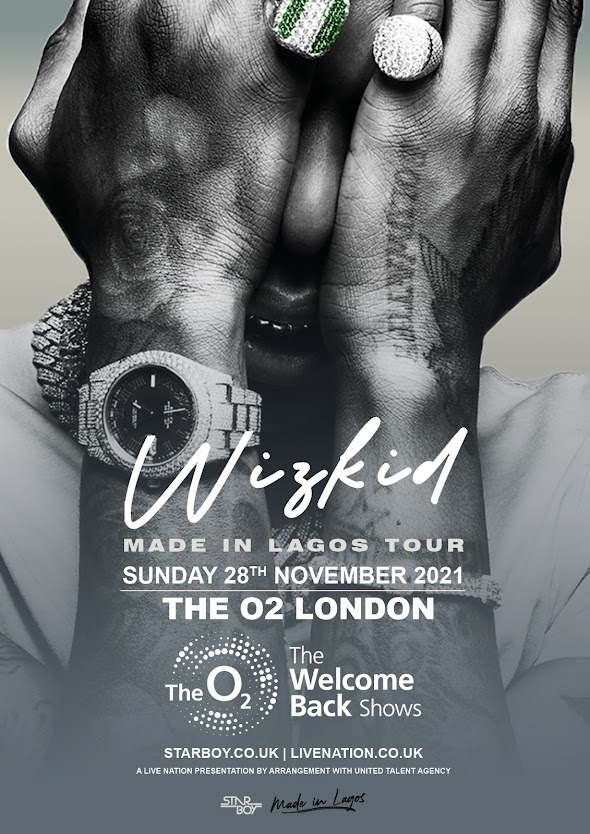 WHO: Wizkid
WHAT: Made In Lagos Tour 2021
Grammy Award winning Nigerian singer/songwriter and global superstar Wizkid today announces the Made In Lagos Tour 2021. Made In Lagos tour will hit North America before arriving at London’s The O2 Arena on Sunday 28 November.
Following the release of his critically acclaimed album Made in Lagos, fans will not only be engulfed in the unique sounds, live instrumentation, and vibes of Lagos, but will celebrate Wizkid’s love and appreciation for where he comes from and his inspirational journey. Wizkid’s Made In Lagos tour will span his 10-year discography.
Wizkid’s headline show at The O2 Arena forms part of The O2’s Welcome Back Show series which features a diverse line up of headline artists performing to full capacity crowds.
Made In Lagos is available everywhere on RCA Records/Sony Music Entertainment [here].
TICKETS:
General on-sale for Wizkid’s Made In Lagos Tour at London’s The O2 Arena will be announced imminently, fans can sign up at www.starboy.co.uk to be the first to hear.
TOUR DATES:
Sunday 28 November London, The O2 Arena
at July 15, 2021