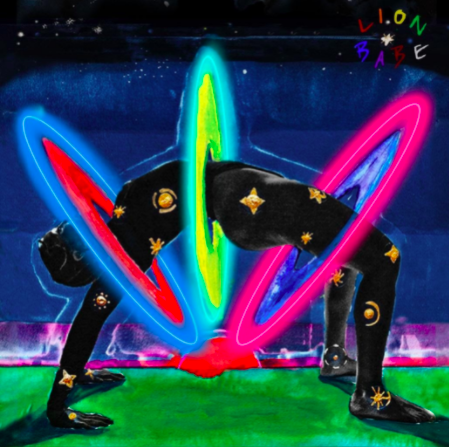 “On ‘Frida Kahlo’ Lucas creates an instrumental bed of sunshine and flowers to underlie Hervey’s rappy cadence and uplifting lyrics.” - BILLBOARD
"New York funk-soul duo LION BABE ignite a funky, psychedelic dance party..." - ROLLING STONE
“Polished groove-funk undertones alongside glitch electronica and rap … an assured step forward from the New York duo.” - EVENING STANDARD
“A sonic patchwork of R&B, soul and dance-pop threaded together with Jillian’s powerful, cruising vocals and Lucas’ artful melding” – NOTION
Announced in the spring with their colourful, art-inspired single ‘Frida Kahlo’, today the dynamic New York alt-R&B/Soul duo LION BABE – comprised of singer-songwriter and performance artist Jillian Hervey and producer/DJ Lucas Goodman, release their brand-new, third studio album ‘Rainbow Child’.
Featuring the legendary rapper and lead member of the Billboard-topping Hip-Hop group Wu-Tang Clan, Ghostface Killah on the entrancing album opener ‘Rainbows’ - with a brand-new visual also released today - and the majestic soul duo OSHUN on ‘It’s Okay’, LION BABE started to create the project last year ‘in response to the heightened pain and injustice Black lives have been experiencing’. They celebrated the album release with two sold-out shows at Mercury Lounge NYC last night.
Drumming up major anticipation for the project over the past few months with a run of stand-out singles and visuals, also comprising the smooth. soulful ‘Signs’ featuring Siimbiie Lakew - which NME described as a ‘freshly squeezed slice of R&B’ - and their latest single the retro flavoured ‘Get Up’ ft Trinidad James, the new 9-track visual album, which will have a visual for each track, perfectly showcases the heavenly combination of Jillian’s mesmerising vocals and spellbinding lyricism and Lucas’ intricate and addictive production and is set to be the soundtrack to the summer - and for many more to come.
Speaking on ‘Rainbow Child’ LION BABE said:
‘Rainbow Child’ celebrates and reconnects with our inner child. It explores all of the depths that we experience when we have changed but reminds us to always embrace it all. The pain, beauty, fear and love. Acceptance of life in its totality brings true radiance inside and out.”
The new project follow’s 2019’s ‘Cosmic Wind’ which spawned stand-out singles such as ‘Western World’ ft Raekwon and ‘The Wave’ ft Leikeli47, and a series of stunning visuals.
Last year LION BABE completed their ‘Around The World, At Home’ virtual global tour, released their funky, House take on Nelly’s hip-hop hit ‘Hot in Herre’ - which was tipped as one of the ‘best R&B songs right now’ by The FADER and shot to the top of Hype Machine’s number one spot – and their interpretation of Mos Def’s classic ‘Umi Says’ which saw proceeds go to the NAACP’s Legal Defense Fund. Kicking off 2021 in style, their reimagining of Odyssey’s ‘Native New Yorker’ was featured as the soundtrack of Michael Kors’newest fragrance Gorgeous.
Since 2014, the duo have garnered an impressive music catalogue and have collaborated with some music favourites such as rapper/actor Childish Gambino, and house music sibling duo, Disclosure, who featured the New York natives on their smash single ‘Hourglass’ which they performed at huge stages across the world. In 2018, HBO's Original Series Insecure recruited LION BABE for their singles ‘Hit the Ceiling’ and ‘Just Me’, which were broadcasted for Seasons 1 and 3. The band have also made appearances at festivals such as Coachella, AFROPUNK, Glastonbury, Reading & Leeds, Smokin' Groovest, Milkshake (Amsterdam) and Australia’s Wildlands, Beyond The Valley and Original Fields.
‘Rainbow Child’ tracklist