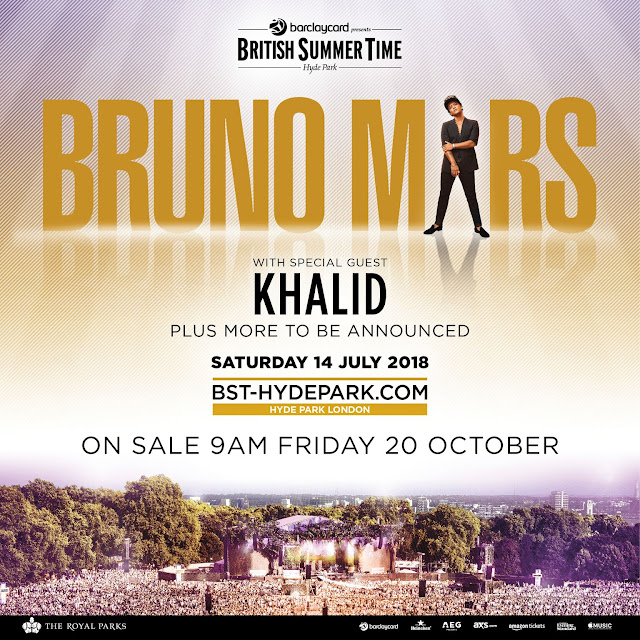 The multi-platinum superstar will be appearing at Barclaycard presents British Summer Time Hyde Park on 14th July 2018, fresh off the back of his ‘24K Magic World Tour’, which spans over 172 shows across five continents in support of his double platinum album 24K Magic. The UK leg of the tour included four critically acclaimed shows at London’s O2 Arena. Now, Mars is set to return to the UK, taking to the Great Oak Stage in Hyde Park with a dazzling visual production and a set-list crammed full of his chart-topping hits.

Mars will be joined by special guest, Khalid. At just 19, he won the 2017 MTV VMA award for Best New Artist, and broke the internet with debut single 'Location'. The single, taken from his platinum selling debut album American Teen, amassed over 700 million streams across all platforms, lending to Khalid being Spotify’s most streamed artist in the world for 4 consecutive days. The breakout star recently supported Lorde across Europe with her ‘Melodrama’ tour, plus has announced his first UK headline tour for 2018.

UK reviews for Bruno Mars at The 02

“A full-stack entertainment storm” – The Guardian

“[Mars] has a range of skills that put almost all of his contemporaries and rivals to shame. He concocts supremely catchy, hook-laden hits and moves like a slickly choreographed street dancer” - The Daily Telegraph

‘Just the Way You Are’, the first track from his debut studio album Doo-Wops & Hooligans, reached number one worldwide, holding the record for the longest-reigning debut format hit. ‘Grenade’ spent two weeks at number one on the UK charts, with ‘The Lazy Song’ becoming the album’s third consecutive single to reach the top five on the Billboard Hot 100. ‘Marry You’, has provided the soundtrack for many a marriage proposal, videos of which were quick to go viral via YouTube.
His second album Unorthodox Jukebox was the fastest selling album by a solo male artist in 2012 in the UK, and has sold over six million copies worldwide. Heartfelt lament ‘When I Was Your Man’ peaked at number one on the Billboard Hot 100, making Elvis Presley the only male to achieve five number one singles on the chart faster than Mars.

In February 2014, Mars was the first performer under the age of 30 to headline the Super Bowl Halftime Show. The Hawaiian troubadour returned to the world’s grandest stage in 2015, becoming the only artist to play two Super Bowl shows in three years.

Since his Super Bowl appearance, Mars has been unstoppable. His 2015 mega hit ‘Uptown Funk’ reigned at the top of the UK charts for six consecutive weeks, winning two Grammy Awards including Record of the Year. As of August 2017, it is the fifth most viewed video of all time on YouTube, with over 2.6 billion views to its name. His third studio album, the double platinum 24K Magic, spawned a whole new catalogue of hits, with title single ‘24k Magic’ and ‘That’s What I Like’ certified four times platinum. The 24K Magic World Tour is Mars’ first full-length tour since his 2013’s hugely successful Moonshine Jungle World Tour in 2013, an international blockbuster that sold two million tickets across 155 sold-out dates worldwide.

Mars’ shows are known for bright lights and a star with stellar performance skills and prowess, oozing charm and charisma – all the ingredients required for a spectacular show. When paired with his Mars’ roster of chart-smashing hits across a range of genres, Mars’ headline slot at British Summer Time is set to be one of the biggest shows of the year.

With two huge headliners now announced for Barclaycard presents British Summer Time Hyde Park 2018, music lovers can expect another phenomenal year from the award-winning festival, all in the heart of London.

On Friday 6th July, music icon Roger Waters will be bringing his Us + Them Tour to the UK for the first time ever. The Pink Floyd visionary is noted for taking his sonic and visual experimentation to breath-taking levels and turning rock n roll into theatre on the grandest scale. Waters will be showcasing highlights from his groundbreaking body of work, with songs from Pink Floyd’s greatest albums (Wish You Were Here, The Wall, Animals, Dark Side of The Moon), along with tracks from his critically acclaimed new album “Is This the Life We Really Want?”.

Now in its sixth year, Barclaycard presents British Summer Time Hyde Park is one of Britain’s biggest and best summer events, attracting some of the greatest names in music to the heart of London’s beautiful Hyde Park.

James King, Senior Vice President, AEG Presents comments: “Bruno Mars is unquestionably one of the best live performers of his generation and we're incredibly excited to have him bring his full production magic to Hyde Park.”

Daniel Mathieson, Head of Experiential Marketing and Partnerships for Barclaycard, says: “It’s our pleasure to welcome Grammy Award-winning Bruno Mars to Barclaycard presents British Summer Time Hyde Park 2018. As one of the best-selling artists of all time and an amazing live performer, we look forward to seeing him entertain a huge crowd on what will surely be a memorable night. Barclaycard customers can get a head start with exclusive pre-sale ticket access from 9am on Tuesday 17th October.”

Alun Mainwaring, Head of Events, Filming and Commercial Development at The Royal Parks says: “Barclaycard presents British Summer Time Hyde Park continues its momentum as the ultimate outdoor event of the summer by announcing another world renowned headliner to appear in this world famous park. Since it began, BST Hyde Park has been attracting the biggest artists on the planet and delighting sell-out crowds - which in turn has helped us to maintain this precious park.”

‘Festival of the Year’ at the UK Event Awards 2013

‘Best Use of New Technology’ at the Festival Awards 2013

*general on sale prices may differ 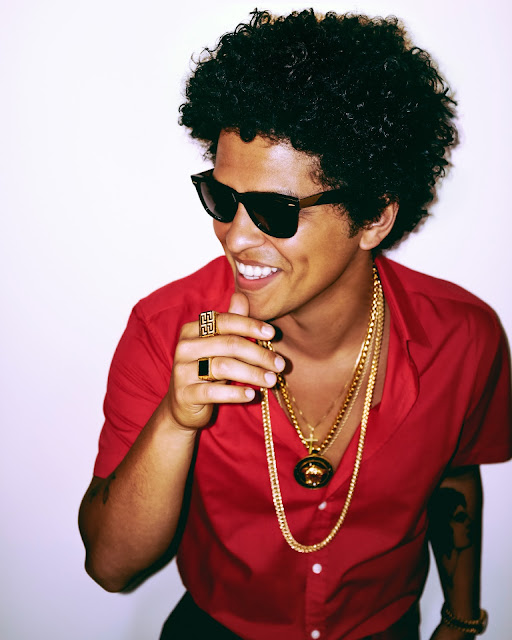 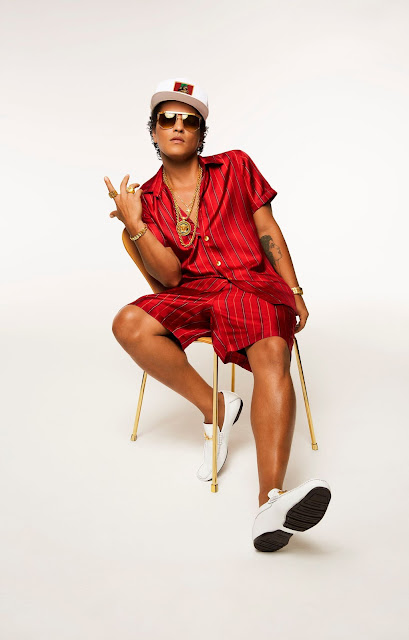 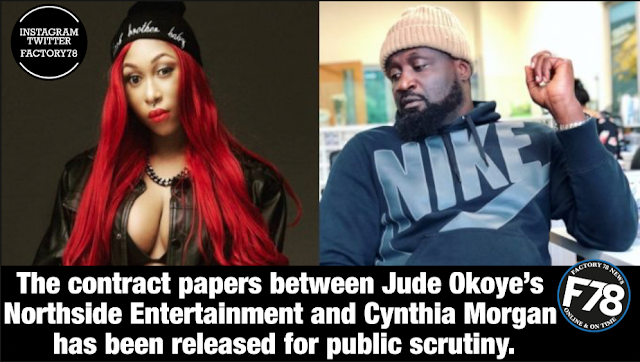