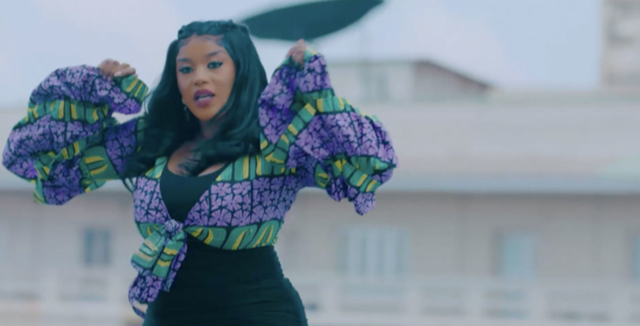 Hackney born and Camden raised Melisa Whiskey is the exciting, British-Nigerian Afropop sensation who has already been making waves on the music scene with her track ‘Bonjour’ and is currently causing a storm with her new single ‘Ajeh’ ft Mystro – which premiered on Complex last week – and now its new must-see visual which was shot in Lagos, Nigeria.

Premiered on Hunger, the visual was shot and directed by the talented Nigerian cinematographer and director Naya – who has previously created visuals for the likes of Teni, Peruzzi, Oxlade and Starboy – and brings the track to life with vibrant, colourful aesthetics and energetic dance moves. Produced by the Nigerian artist and producer Mystro (Wizkid), ‘Ajeh’ will no doubt bolster Melisa’s already burgeoning fan-base with its earworm Afrobeats melodies and her addictive, soulful vocals which instantly catapult her into a lane of her own. The feel-good banger is set to be a constant fixture for the rest of the summer and beyond with its message of not letting negativity affect your positive vibes, as its played at full blast from sound systems, clubs and car radios from Lagos to London and everywhere in between.

Speaking on the track and visual, Melisa said:

"’Ajeh’ means witch or evil-doer in the Yoruba language and as it pertains to the song ft Mystro it’s all about not letting any bad vibes catch you, turning up and having fun and laughing it off. "Shey you go shack Hennessey/abi you want whiskey". Why not have a drink? Just let all bad vibes go and enjoy life.

The video was shot in Naija by my friend Naya who is a director who is doing big things in Lagos and has shot for so many great artists so I was very happy to work with him . We did it in Victoria Island and also in Ikeja on the mainland of Lagos. Naya and myself got some of the hottest dancers to help us really bring the vibe of the track to life. Also, Mystro who produced and features on the track, blessed us and came through on the day. So I can’t wait for everyone to see what we created,”

‘Ajeh’ is the follow-up to ‘Bonjour’ which was produced by E-Kelly (Mr Eazi ‘Leg Over’ and ‘Pour Me Water’) and gained strong momentum on the underground scene and online with hordes of dancers sharing their energetic routines to the song across social media making it one of the songs of the summer.

The release of ‘Ajeh’ signals the release of more new music from Melisa this year. Off the back of her popular single ‘Billin’ which was on heavy rotation across radio stations and popular blogs, Melisa spent much of last year in the studio in Lagos. Honing her distinctive, upbeat Afropop sound and her addictive R&B vocal, Melisa put in some major studio time with Nigerian artist and producer Mystro - who helped to craft massive hits for Wizkid in 2018 including the huge track ‘Immediately’ - and also worked on further tracks with E-Kelly.

Influenced by artists such as Fela Kuti, Bob Marley and Lauryn Hill and coming up during the ground-breaking international success of fellow Afropop acts such as Wizkid, Burna Boy and Nonso Amadi, Melisa Whiskey has steadily been proving why she is a musical force to be reckoned with since she first burst onto the scene with her feature on the Redlight track ‘Threshold’ in 2015 which was Annie Mac’s ‘Hottest Record’ on her Radio 1 show, just a year after Melisa signed her first publishing deal with BMG. Also collaborating with legendary US producer and DJ Roger Sanchez and releasing a slew of buzzing solo singles, Melisa has been making serious moves to establish herself as one of music’s next big things and with the arrival of ‘Ajeh’ and more new music on its way, her star is set to rise to epic heights.