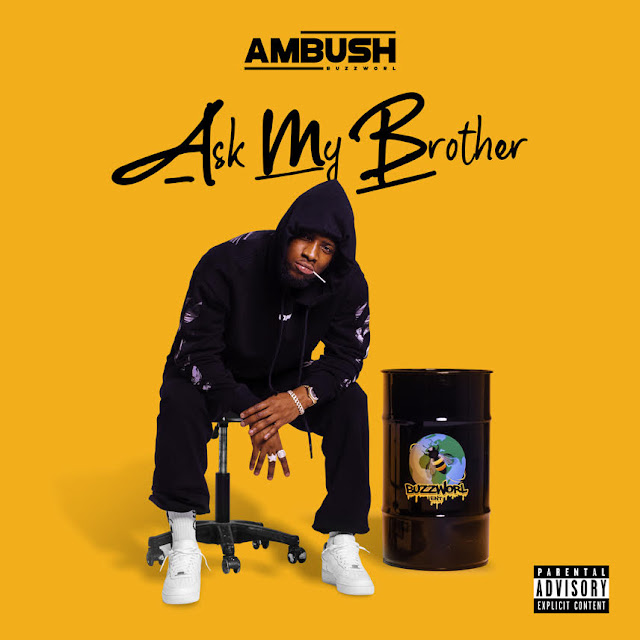 North West London rapper Ambush today releases his highly anticipated debut mixtape ‘Ask My Brother.’ Since releasing a steady stream of video’s from the project starting with Eastenders, moving onto Winners featuring H Moneda and C Biz, and lastly the intro to the tape A.M.B (InTRILL), Ambush has been teasing listeners.

One of Northwest London’s finest, Ambush, gets the summer rolling with his eagerly awaited debut mixtape, Ask My Brother. Creating drama and suspense with hard hitting beats, catchy one liners, and strong bars sending out a fierce message.

In April, he released the first single from his new mixtape, Eastenders produced by Nastylgia, set the pace for the rest of the mixtape. With his catchy bars ‘beef over gyal is mad’ sending out a strong message.

Opening intro track A.M.B (INTRILL) starts the feel of the project, each song tells a story, building a dramatic feel, a cliff hanger, alluring you to the next track.

We hear some familiar voices too such as D Double E and R.A. feature on the track Started. The track creeps into an old school grime rhythm, full of futuristic synths and heavy basslines. We also hear the bars of well-known artist C-Biz and H Moneda on Winners produced by Scott Supreme. Both these musicians compliment each other with their parallel styles making you can feel the chemistry between them. Heavyweight producers The FaNaTix produce two tracks on the mixtape Casino & Been On.

If these big names were not enough, Godfather of UK rap Giggs, features on not one but two tracks, Silly Events and Mass on Sunday both produced by Buzzworl producer Mubz Got Beats. Both these tracks have very intense beats, which flatters Ambush and Giggs signature rhythm and persona. In Silly Events we again hear more of those catchy bars ‘been through silly events, my tings really intense’.

There is a little something for the ladies too, Side Bitch has more of a softer feel, with its slow jam kind of vibe, giving you an insight into the thoughts which go through a man’s mind and how he may be feeling with trust issues and relationships.

The feel of the album is cold and dark, with heavy base beats, every song will have you vibing. Ambush has connected to his fan through his tantalising lyrics, making you feel the intensity behind the words with his stand-out delivery.

As his first official highly anticipated project release, this mixtape will be just what fans have been waiting for from Ambush, leading him to gain further recognition as one of the UK’s most revered and hotly tipped rappers.