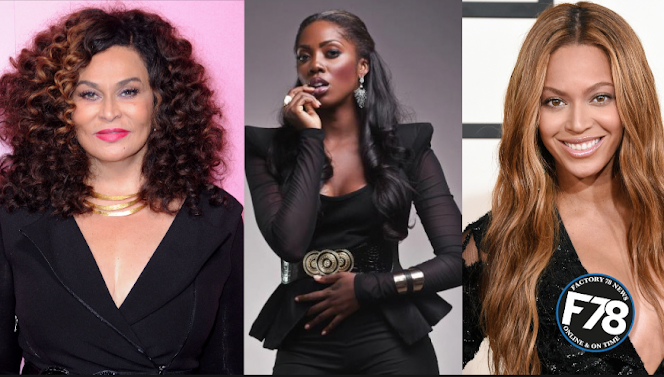 Tiwa Savage has replied Beyoncé’s Mother, Tina Lawson, after calling on the singer to lend for the #EndSARS protests and killings.
In a lengthy post via her Instagram page, Tina Knowles reacted to Tiwa’s video slamming her for calling on her daughter to lend a voice to ongoing killings and protests in the country. She wrote: “Good Morning , I am deeply saddened by the events that happened last night in Lagos! When people lost their lives and were beaten and abused. I understand the injustices that have been going on in Nigeria, it sickens me. SARS came to my attention last week and immediately I posted about it! I had not heard of it before as I have not been following closely Instagram as much as I usually do due to some serious personal family challenges. As a result I have been mostly posting funny things to try to make people smile.
After researching on line I understood that SARS (a special task force supposedly to stop crime) were abusing their power and harassing young people. Very much like what we have been protesting for , here in America. Everyday we are disproportionatly stoped harassed jailed and sometimes killed ! These senseless killings of our black men and women! The brutal treatment of our people by law enforcement ! No knock warrants etc.
Of course I guess much of the public does not think we have personal problems in our family . We are supposed to be super human and not have loss, or health issues or personal problems because our sole purpose is supposed to be of service and humility and take as much abuse from the haters as they choose to put on us. No matter what my daughter does she is scrutinized and torn apart! She Makes a record and uses all African artist, producers, writers.
She is criticized because She didn’t get artist from every country in Africa there are 52 countries! Then she makes a film that by the way she doesn’t profit a penny off of, because she spent every penny in the budget on making something that celebrates our heritage!
What profiting off of you did she do? She made art!! She is an artist! That is what artist do. She is not your political leader and not your whipping board. They saw a 30 second trailer and critics and couch activist attacked! !!! yes I said it and I meant it! They came out and did their usual thing about her being a culture vulture and saying some of the most ugly and vile things about her that were totally not true and insults galore.
Someone that was on the last project who BTW is in constant contact with her team decided that instead of contacting her team and asking her to post to assist in spreading the word . I am appalled that They would get on social media and do it !! Why not ask the people you are dealing with all the time????? On her team!! I don’t understand that !!! I am sure at the time she was not thinking straight because of the trauma that the country was facing but come on!!!!!!
I have had enough of the hating and am personally tired of the attacks. And it is disgusting how people sit behind a computer and talk crap all day and many of them do absolutely nothing else ! It is so easy to post ! Don’t get me wrong posting is very important that’s why I do it every day about social issues. It spreads the word and that is important But everybody has a right to activate in their own way. If we do us , and focus on what WE can do and not expect Beyonce to do exactly what she is told when you tell her to do it! Then we would get it done better.
When I made my post it was not about any group of people and certainly not the Nigerian People ! Only the attackers and haters that no matter what she does you feel entitled to bully someone and take credit for bullying her into making a by a statement !! By the way many people are just posting today because it has gone to the next level after last nights tragic events. Are you critics attacking them? Sorry if I offended anyone just trying to make a statement for change and asking for help !
I was not talking to you ! Those comments were for the rude attackers that rudely ,constantly come for us in a vile and abusive way ! Trying to bully and shame us into submission just like the oppressors. We not your whipping board . I am not here for it! You do not run me and bully me I will fight back. You don’t take credit for bullying her to post ! I pray everyday for Nigeria and all countries that are being abused and murdered for the color of our skin!!! I would do anything to help but stop with the abuse and stop trying to make Her your spokesperson and shaming people for doing things in their own way!!!! #endsars
Reacting to the post, Tiwa simply wrote that we all have mothers. 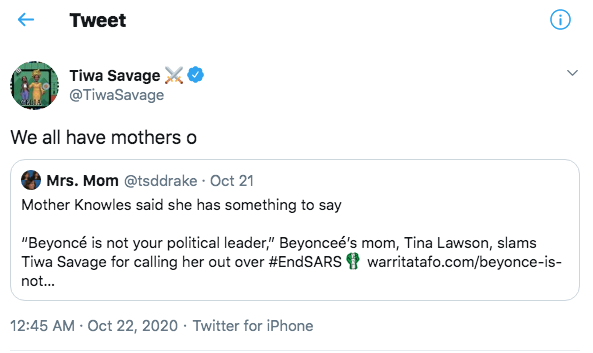