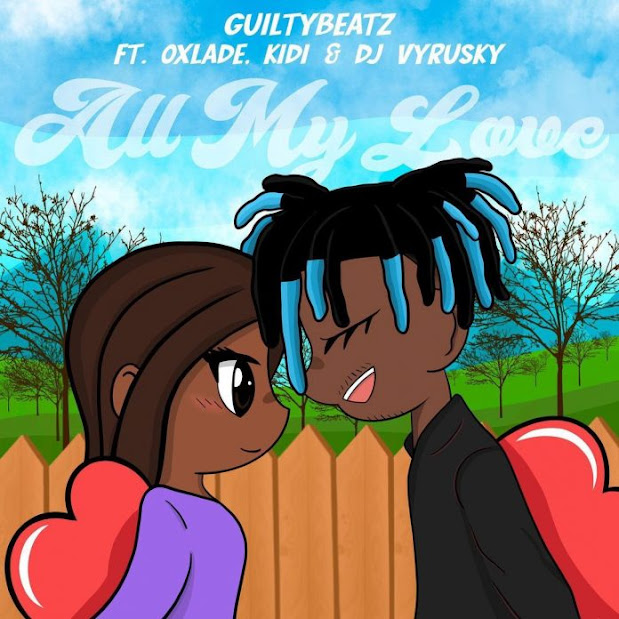 Grammy-nominated Ghanaian producer GuiltyBeatz shares his new single, to close out 2020, ‘All My Love’ with Kidi, Oxlade and DJ Vyrusky. ‘All My Love’ is the first release on GuiltyBeatz very own label Eight Music. GuiltyBeatz has teamed up with two of West Africa’s hottest artists Kidi and Oxlade to create an anthem for lovers across the world, with the added swag of DJ Vyrusky.
A bouncy, buoyant beat with sweet vocals for dancefloors across the world. “I connected with Oxlade and sent over my beat and as soon as I received his vocal idea it was clear to hear that Kidi would be the perfect addition to the record.”
Says Guilty “I want people to hear the record and feel uplifted, happy and truly be able to vibe…to feel love.” ‘All My Love’ closes out a year that has seen GuiltyBeatz take his sound in new directions from the UK to the US, from Canada to Jamaica he truly travelled international through his craft.
Earlier this year GuiltyBeatz dropped his single with Cadenza and M.I.A ‘Up Inna’ that received the remix treatment from Alicai Harley, Beam and Cham. Just last month he produced South London rappers Shaybo’s ‘Dobale’ and went to share his skills in the electronic arena with his remix of Aluna’s ‘Envious’.
Currently nominated for Tik-Tok song of the year with ‘Iyabo’, the lead single off of his debut EP ‘Different’, that dropped earlier this year, GuiltyBeatz has been making us dance throughout a pandemic and he plans to keep us on the dance-floor in to 2021.
Stream/Download: https://guiltybeatz.lnk.to/AllMyLove
at December 11, 2020