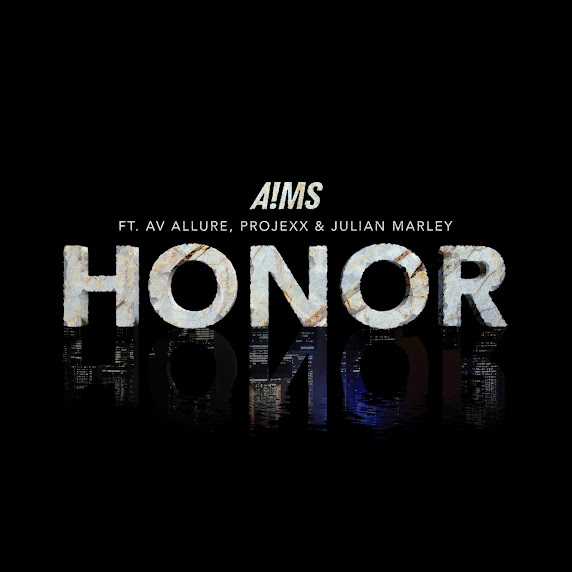 In a sensational international link up, multi-platinum, award-winning rapper, record-producer and entrepreneur A!MS enlists Projexx, Julian Marley, AV Allure and super-producers Cool & Dre for breakout record ‘Honor’.
STREAM/DOWNLOAD: A!MS – HONOR FT AV ALLURE, PROJEXX & JULIAN MARLEY
Echoes of afro-swing, Caribbean progressions and melodic rap chords lay at the heart of ‘Honor’ as it sits effortlessly on the Hip-Hop spectrum, capturing the diverse and culturally rich melting-point of London within its fabric. Teamed alongside a daring visual that sees a London City heist take place, the artists brave their way through the capital’s streets with high-speed chases and helicopters in hot pursuit, as they battle for Honor. Boasting an exceptional hook, passionate lyricism and a wave of global accents, it is the mutual respect and international currency of ‘Honor’ that is celebrated in this masterpiece of a single.
Produced by Grammy nominated Cool & Dre, ‘Honor’ features the duo’s Midas touch, which has been responsible for millions of sales and hits from the rap world’s elite, including DJ Khaled’s recent gold selling album ‘Khaled Khaled’. Opening the record, emerging UK artist AV Allure delivers a soulful, powerhouse hook that binds together the verses that follow. A!MS offers the first verse with gusto as he lays down his bars with determined strength and confidence, setting a tone of integrity and distinction. Drawing on the island vibes, Grammy Award winning reggae artist Julian Marley blesses the record with his spirituality bringing good intention, love and freedom to the record, whilst Jamaica’s hottest, rising, dancehall star, Projexx, delivers the perfect accompaniment in his patois, soulful flow.
Renowned for his rap anthems including Supreme, Run and Diablo, A!MS is an internationally acclaimed rapper, songwriter, producer and entrepreneur from the UK who has built an extensive career that houses over 50 million YouTube views and 20 million Spotify streams. Through the vehicle of lyricism and visual art, A!MS tells vivid accounts of his own realities that are rooted deeply within family, respect, morals and a flamboyant lifestyle that isn’t for the faint hearted. With close connections to Cyprus, the Mediterranean culture and the jet-set lifestyle, adopted by so many of the modern world’s stars, his entrepreneurial flair places him central to the music and entertainment business across the globe. Over the course of his career, A!MS has worked and introduced uncountable artists , including the likes of Afro B, The Game, Cool & Dre and many more. He is regularly featured across world music platforms including, MTV, BBC, Global and Bauer radio channels and recently featured his penchant for cars alongside the release of his single ‘Diablo’ for an exclusive glimpse around his personal car collection and home for ‘Trace Yards’.
Making worldwide connections, A!MS independently and effortlessly slots together styles, vibes and some of music’s MVP’s for his latest single. Both revolutionary and visionary in his business acumen and musical capability, ‘Honor’ signifies the evolution of A!MS and opens the floodgates on a whole new wave.
Stay up to date with A!MS by following his socials for news about upcoming releases & more.
INSTAGRAM / SPOTIFY / TWITTER / YOUTUBE /
at June 18, 2021