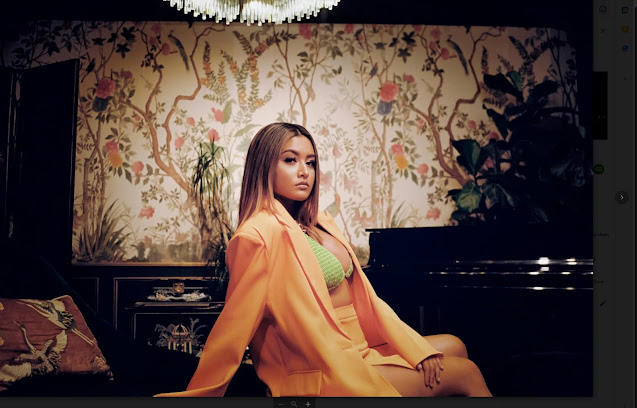 STREAM THE ‘YELLOW’ EP HERE
“Crystal-clear falsetto melodies, sharp production and laid back verses.” – BILLBOARD
“Slow, oozing bass tones, sparse drum-machine taps and gaping silences.” - NY TIMES
Following the summer release of her ‘PURPLE’ EP comprising the tracks ‘FOOL AROUND’ AND ‘IDEA OF YOU’, the mesmerising singer, songwriter, instrumentalist and producer YAS has released her brand new ‘YELLOW’ EP featuring the new singles ‘origami’ and ‘space’.
Forming the fourth and final instalment of her addictive and captivating COLORS EP series which kicked off with ‘RED’ and ‘BLUE’ earlier in the year, with each conveying a distinct emotion and sound, ‘YELLOW’ features another look at YAS’ impressive musical range and capabilities whilst not only exploring new sonic realms but also her familial and cultural ties.
Blending genres to a sublime effect, throughout the EP listeners can find traces of YAS’ Japanese roots through the use of her native language and family history. The multi-textured ‘origami’ is a beautiful homage to her mother and the dreams she sacrificed to bring her children to the US for a better life with the name signifying a tender back and forth between her and her mother. ‘space’ takes a dive into maturing love and reconciling the inevitable familiarity with the initial deep bouts of passion and love. YAS spearheads all the writing and production with support from long-time collaborators including Romeo (FARR), KOLE, Taylor from Earth and Shibo
Speaking on the ‘YELLOW’ EP YAS commented:
“Really excited to end my year with YELLOW. I feel like I’m starting to get a better glimpse into my creative potential. ‘origami’ is a good example of reaching into an elevated realm with a more experimental aesthetic.”
A classically trained violinist, who is also an expert songwriter, arranger, composer, and producer who has recorded and performed with some of the biggest names in music such as Selena Gomez, ASAP Rocky, Big Sean, Kanye West, NAS, and Shawn Mendes, YAS is an artist set to take the music world by storm. Following the release of her two EPs ‘RED’ and ‘BLUE’ which spawned the tracks ‘LIAR LIAR’, ‘TUCKITIN’, ‘worth it’ and ‘for free’ and now the ‘PURPLE’ EP, YAS is poised to continue her winning streak with this final instalment of the series ahead of more new music in 2022.
at November 18, 2021