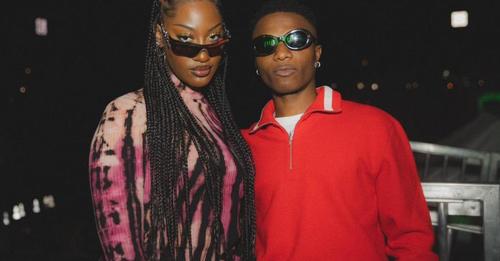 Nigerian singers, songwriters, and performers Ayodeji Balogun, aka Wizkid, and Temilade Openiyi, aka Tems, are among the leading nominees for the 2021 BET Soul Train Awards.
The prestigious award, meant to laud and celebrate African-American entertainers, is scheduled to be held on November 20, 2021, at the Apollo Theatre, and it will be hosted by ace actresses/comedians Tichina Arnold and Tisha Campbell.
The nomination list, which was released on November 2nd, 2021, saw Nigerian duo Wizkid and Tems bag five nominations each. Four of which came from their smashing tune ‘Essence‘ which got a nod in the Song of the Year, Video of the Year, The Ashford and Simpson Songwriter’s Award and Best Collaboration categories.
Then Wizkid bagged a nomination for Album of the Year, for his classic project Made In Lagos, while Tems was also nominated for Best New Artist.
H.E.R. is the overall leader of the 2021 Soul Train Award nominations, with eight nods, followed by American prolific singer and performer Chris Brown, who has six nods, and Jazmine Sullivan, who also has six.