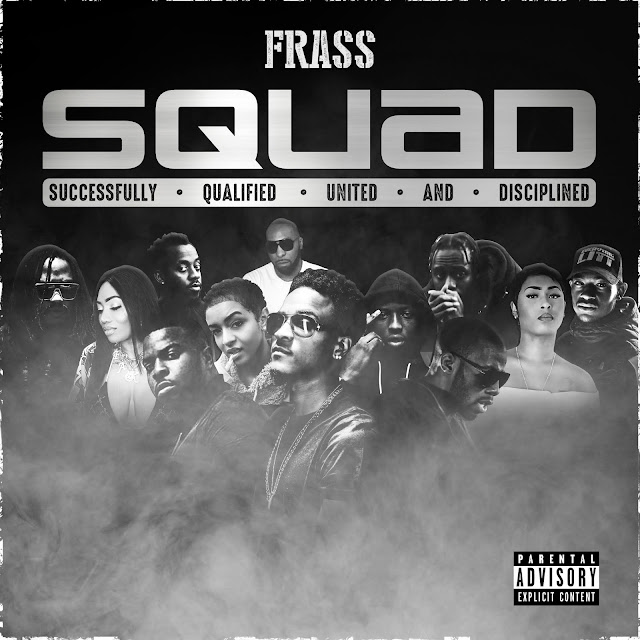 As one of the UK’s most underrated artists, Frass debuts a serious album entitled ‘SQUAD (SUCCESSFULLY QUALIFIED UNITED AND DISCIPLINED)’, packed with 9 tracks and an impressive list of features that will certainly make heads turn.

Dropping a fresh video to accompany the album release, GRM premiered ‘Real Life’ which soared past 100k views in just 24 hours. Featuring Abra Cadabra & Kush, Frass draws on his Jamaican heritage and his London roots as bashment influence and Jamaican patois twist around gritty, bold and melodic trap elements – something that has becomes core to his sound and remains central to the album.

Born in Jamaica and raised in London, the musical and cultural influences that have shaped Frass are clearly audible and represented on ‘SQUAD’ and if that vibe alone isn’t enough to draw you in to discovering him then you only have to look at who he’s working with to figure out he has some serious kudos in the game and the streets are already rating what he’s doing. From Abra Cadabra & Kush on ‘Real Life, to RA on ‘My Ryder’, Clay on ‘Sauce’, J Spades on ‘Take Me Higher’, Lisa Mercedez on ‘Give It To Mi’, Littlez Section on ‘Diamonds & Pearls’, Paigey Cakey on ‘Ring Ring’, Elmz St on ‘Different’, Kandii Gold on ‘The Move’ and Wass PF on ‘Wah She Want’, the records ring off with impressive weight.

Having self produced the album too, Frass also has visual control over his output and given his video drops to date, its clear he is about his business in all respects. The first visual release from the album came for ‘My Ryder’ and followed a storyline inspired by the NAS and DMX cult hit movie ‘Belly’, this was followed by the sexy visuals for ‘Give It To Mi’ and now Frass takes it to the hood as he draws on ‘Real Life’ experiences to set the scene.

Making his debut in 2015, Frass has developed an impressive following. Records such as ‘Batty Rider’ earned him Spotify playlist support and over 1 million streams with his other singles, including ‘Love & Dun’ topping over 370k streams. With the release of ‘SQUAD’ adding to his ever-growing repertoire, it’s time to discover Frass.
at April 30, 2019