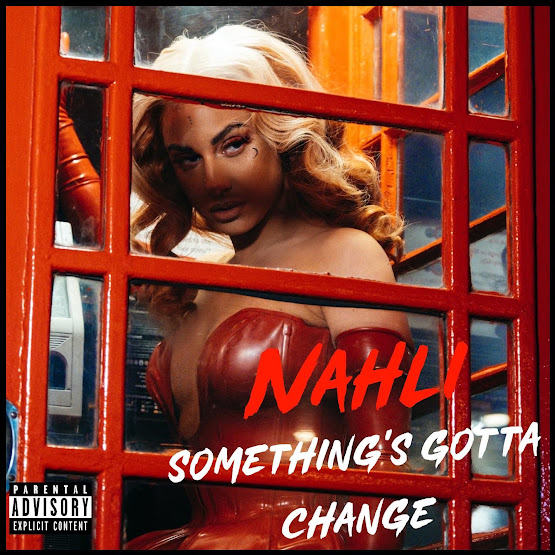 NAHLI’s talent precedes her; her unique raw and sparkling approach to her music, style and life as an artist has been highlighted in depth via her features on tracks such as Professor Green’s ‘Bad Decisions’, Rude Kid’s ‘Please Don’t’, Crystal Fighters ‘Costa Rica’ and Conducta’s ‘Only U’ but as she flies solo on her new single ‘Something’s Gotta Change’, NAHLI’s level of talent can really be admired in its glory.
STREAM/DOWNLOAD: NAHLI – SOMETHING’S GOTTA CHANGE
In a thought-provoking statement, ‘Something’s Gotta Change’ epitomises who NAHLI is as an artist. It’s not just a single, it’s more than that, just as NAHLI isn’t just an artist. A spokesperson, an activist, a colourful array of talent, thought and lyricism, NAHLI is using her craft for purpose and ‘Something’s Gotta Change’ marks the start of that.
Understanding the catalyst of the creation, NAHLI explains, “The world is starting to allow triggering messages in film and TV series, more and more every day. We’re seeing more understanding of LGBTQIA+. We’re seeing more representation of race and colour. We’re broadening our minds. We’re no longer brushing topics like rape and racism and discrimination under the rug. The media is no longer turning their backs on women claiming to be a ‘victim’ or for ‘asking for it’ or ‘she wore provocative clothing’. NOW is the time for change. I want people to feel empowered by this track. You’re not alone anymore. This is a movement. This is my absolute proudest work.”
Produced by 9Pockets, a new writer/producer duo from London Fields, and UK-based music producer, songwriter, and award-winning technologist Manon Dave, the record is blessed with both inspirational new flair and gifted experience. Finding a foothold in the scene of upcoming artists, 9Pockets hone in on a truly unique sound that sees them work with everything from hip-hop to indie rock to bedroom pop, with NAHLI's 'Something's Gotta Change' being a flagship example of the duo's promise. Manon Dave adds in his celebrated experience as a producer and co-writer, which has seen him work with will.i.am and the Black Eyed Peas, Adam Levine of Maroon 5, Oscar award-winner AR Rahman, and Grammy-winner PJ Morton.
Endearingly honest and exceptionally driven, NAHLI’s poetic and empowering record is both bold and necessary. It is a track of substance that is needed to add some balance to the negative messages that are pumped into our minds and call out the hateful wrongs within society. Partnered with a stunning and powerful visual that opens at NAHLI’s art studio – a place she found her solace and income during lockdown whilst unable to perform music, she relays the message through an all-star cast of women who stand in solidarity with one another. NAHLI presents herself in many guises as an everyday situation of walking home results in a horrific sexual attack. Hard-hitting to watch, the message is clear and as the women within the video respond to the attack, it artistically visualises how personal attacks are felt throughout our communities and by our loved ones. Directed by Cat Couture, a London based creative that refuses to be boxed. Cat’s years spent traveling the globe as a fashion model, interviewing the likes of Alicia Keys and The Black Eyes Peas as a TV presenter, and performing in front of thousands or gracing magazine covers as a former Sony Music artist, has positioned her perfectly as an independent multidisciplinary artist who does it all. From directing, writing, photography, music, poetry and art, Cat Couture strives to promote equality, respect and positive change within her work, something that is highlighted in her founding the WeAreAllAlike Campaign, and in the creation of the music video and documentary for NAHLI’s new single ‘Something’s Gotta Change’.
Beautifully written and delivered, NAHLI has an incredible talent for weaving her British accent through her lyrics to lay bare our vulnerabilities as human beings. Her soulful tones and emotion spill perfectly into her music allowing it to resonate with anyone that takes it in. Whilst previous tracks have captured the force that she is, the message is clear with her latest record as NAHLI takes a stand and demands that ‘Something’s Gotta Change’.
Stay up to date with NAHLI by following her socials for news about upcoming releases & more.
INSTAGRAM / SPOTIFY / TWITTER
at August 07, 2021